In India, wearing any kind of footwear was, once upon a time, considered a prerogative of the upper classes — and chiefly, men. This skewed perception persisted for many years.

Despite this, the footwear industry has flourished. And one of the leading names in the market today is ‘Liberty Shoes Ltd’, a company based in Karnal, Haryana.

Like many other entrepreneurial attempts, this too was a result of swadeshi fervour. In the wake of Independence, quite a few cooperative ventures took birth. One such was a shoe company set up by Jawaharlal Nehru. It was not very successful and was facing closure in 1954 when three men — Dharam Pal Gupta, Purshotam Das Gupta and Rajkumar Bansal — evinced an interest in it and took over the reins. It was initially called ‘Pal Boot House’ and is said to have started with the manufacture of just four pairs of shoes a day.

From this humble beginning, the shoe company grew in strength and, by 1964, the brand name ‘Liberty’ was launched. The name was ostensibly chosen for two reasons — to free the ‘untouchables’ of India, and to liberate Indians from the stranglehold of foreign brands. The company entered into a tie-up with Hungary and received its first export order of 50,000 pairs of shoes from Czechoslovakia.

Till the early 1980s, the company was primarily in the business of exporting shoe uppers. As the domestic market started picking up, Liberty set up its first factory, in 1982. Its shoes were initially manufactured using polyurethane technology, a first in the market. This meant higher overheads and, hence, higher pricing. Despite this, Liberty not only survived but also became one of the favourite brands in the market. By 1989, it had become a ₹35 crore company. 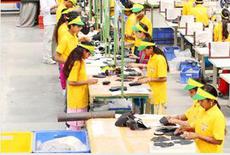 By 1993, Liberty started making non-leather products as well. In 2003, it went in for restructuring and separated its manufacturing and retail businesses. Liberty Shoes Ltd became the holding company for the shoe business and a subsidiary, Liberty Retail Revolution Ltd, looked after the retail part. In 2014, the two merged again. Around this time, the company tied up with leading fashion designers to develop a line of footwear to match designer clothing.

‘For classes and masses’

Even as it grew organically, Liberty partnered with Pantaloon in 2006 and, in 2015, took over two footwear businesses.

The brand’s longevity and recall could be attributed to its proposition of something for everyone — ‘classes and masses’ — for both genders, all age groups (traditional, trendy and functional), all income groups and across industries. The company offers multiple brands because of seasonality and different target audiences. 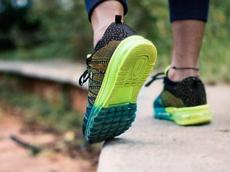 Among the sub-brands, Force10 was the first, and was launched as a fashion-cum-sporting option for youth. Footfun is for toddlers learning to walk, Fortune is for men who are looking for formal wear, Tiptopp is for women who prefer high heels, and Senorita for the fashion-conscious woman, Coolers are sandals for summer and Gliders are targeted at the youth.

Liberty is one of the leading brands in industrial safety shoes. The Warrior brand offers special application safety shoes for industrial workers in sectors such as oil and gas, construction and steel. These may be rugged, lightweight, heat-resistant, waterproof, electric shock-proof or sport other specific features, depending on the kind of workplace. The range also offers specific shoes for uniforms for schools, offices, and hotels. The Fighter range of industrial safety shoes have the added advantage of being economical. The company plans to make shoes for the Defence and police sectors.

All these products — a total of about 50,000 pairs of footwear a day — roll out of six manufacturing units located at Karnal, Gharaunda, Libertypuram, Uttaranchal, Ponta Sahib and Roorkee. Liberty’s worldwide distribution network of 150 distributors, 400 exclusive showrooms and more than 6,000 multi-brand outlets pan-India then reaches the products to the customers. The company plans to increase the number of showrooms to 1,000 and add 50 new stores over the next year.

These manufacturing units are called ‘Humantech’ Centres and have the ISO 9001: 2000 and SA 8000 certifications. They are reportedly environment-friendly and have extensive greenery. In fact, Liberty maintains the Karnal Round-about, which is now touted as the city’s ‘green showpiece’. In April, Liberty celebrated the 49th edition of ‘International Earth Day’ by gifting plants to staff members. 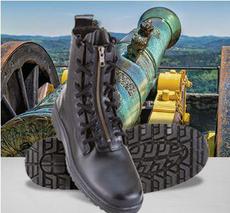 It recently forayed into the accessories segment, including leather bags (laptop bags, ladies’ bags, wallets) shoe care (Shoesmile brand of polishes and cleaners) and foot care (perfumed socks). The company has entered the lifestyle retail business with ‘Liberty Lifestyle’ and its range of perfumes.

Liberty exports its products to about 25 countries including fashion centres like France, Italy and Germany.

How does the company ensure top-of-the-mind recall for its brand? Apart from the undeniable quality that keeps old customers loyal and attracts new ones, Liberty has different advertisements for different brands. It cleverly runs the campaigns for the various categories depending on the period when they would be most in demand. One of its first ad campaigns, the youth Forces 1-10 for its Force 10 sub-brand, became extremely popular and resulted in a dramatic upswing in sales.

The latest product from the Liberty stable, the ‘Prefect Shoes’, was launched with a campaign ‘Prefect Sitare’ for outstanding school students in academics, sports, quiz, dance and music. The company’s promotional schemes are ambitious: in 2018, its ‘win a car’ scheme drew tremendous public response. This year, it is organising a lucky draw for Liberty shoes customers to witness the World Cup!

The brand is also associated with the Miss India pageant and other fashion events. Actor Hrithik Roshan is the latest brand ambassador.

The company has contributed its mite on the CSR front, promoting yoga, holding occupational safety and health exhibitions, donating water purifiers and sewing machines, contributing school bags and bicycles for girl students through the ‘Beti Bachao Beti Padhao’ scheme and setting up the Sanjay Charitable Hospital at Karnal. It has also made it an annual practice to recognise and felicitate the winners of the Republic Day Bravery Awards.

The 2008 Economic Times ‘Most Trusted Brands’ survey included Liberty in the top 100.